The Moesa railway bridge near Bellinzona is a three-spans bridge consisting in two parallel steel girders with their lower part supporting a 50 cm thick concrete deck. This new bridge was build parallel to the old steel bridge. After dismantling this later, the new bridge was then pushed on the old and refurbished pillars.

Measurement of the concrete deformation due to shrinkage and to the pushing of the bridge.

The sensors that were usable after installation gave nice shrinkage curves similar to those encountered at Venoge. A discontinuity due to the heating produced by the concrete setting in the successive section was also visible. During the push phase, additional sensors were attached under the concrete slab and measured the curvature of the bridge due to uneven push 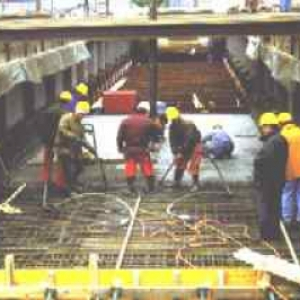