Learn about pressuremeters and their critical role in Geotechnical projects in this second installment in our series of blog posts, presented by Roctest technical expert, Louis Marcil.

This is Part 2 of a series of posts about pressuremeters. Parts 1 and 3 are available on our website here and here.

Pressuremeters (PMT) are categorized by their method of installation, method of measuring deformation, and whether they are designed for use in soil or rock.

A pressuremeter probe can be installed in a pre-drilled borehole, in a borehole drilled simultaneously, or directly driven or pushed into soft soils. These three types are referred to as pre-bored, self-boring, and full displacement (cone) pressuremeters. It is important to distinguish between them for at least two reasons. First, the ease of use is not the same between them. It is much easier to push a full displacement probe, than to install a self-boring one. Second, and more importantly, the installation method can change the properties of the ground adjacent to the probe thereby affecting test results.

Pre-bored pressuremeters are the most common probably because they are more versatile (they can be used in almost all types of soils), more accessible from a commercial point of view, and they produce parameters that can be used directly for foundation design.

Pressuremeters are categorized according to the method of measuring deformation: those using electrical probes and those using hydraulic probes.

Electrical probes integrate sensors that directly measure the radial expansion of the probe’s membrane in order to determine ground deformation. Some of these electrical probes are very sophisticated and may include sensors measuring parameters such as pressure inside and outside of the probe, direction of the deformation, and temperature. Often, they are controlled with a microcomputer allowing high frequency monitoring. 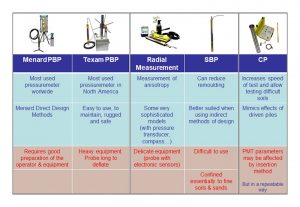 Hydraulic probes contain no electronics. With these, ground deformation is determined by measuring the volume of fluid injected into the probe from the surface. Hydraulic probes, in turn, may consist of a monocell or a tricell probe that includes one measuring cell and two guard cells.

Pressuremeters using hydraulic probes are the most common ones. They are more robust, less expensive, generally easier to use, and they allow the use of well-established design methods.

Pressuremeters were initially developed for testing soil. Soon after, their performances were improved allowing their use in rock (mainly soft rock). Flexible (or borehole) dilatometers were developed in parallel for specific use in rock. Despite a different terminology, pressuremeters and flexible dilatometers are, in my opinion, equivalent devices, because both consist of a cylindrical probe with a flexible membrane loading the soil or rock radially in a uniform way. Both types of probes use in-situ cylindrical cavity expansion testing. The important difference is their sensitivity and working capacity.

The selection of a device should be made using several criteria. First, the normative requirements for a region should be considered. Standards generally specify the types of pressuremeters to which they apply.  For example, the ASTM D4719-20 standard concerns the use of pre-bored pressuremeters. Second, consider the type of soil or rock. For example, some pressuremeters can be used in rock, but soft ones only. Soils containing a lot of large aggregates cannot be tested with a self-boring pressuremeter. Finally, the desired design parameters should be contemplated.

This latter is very important. For instance, a first loading modulus obtained with a full displacement PMT may differ from the one obtained with a pre-bored PMT. Actually, the design method, or the way the PMT results are used, may dictate which pressuremeter is best suited for a project. This leads to the subject of the next blog, which will discuss the applications for pressuremeters (and dilatometers).

In the meantime, I wish you determination and resilience in order to get through this period of confinement!