The PIL-10 is a test equipment used to determine the Puncture Resistance Index of rocks for classification purposes. Retaining all the qualities of our predecessor PIL-7, the PIL-10 offers increased load capacity, productivity, reliability and ease of use. Its durable stainless steel construction can withstand punching hard cores up to PQ size. 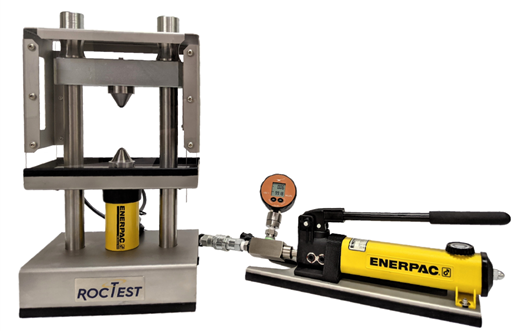 The PIL-10 punch test apparatus has a loading frame on which is mounted a hydraulic cylinder as well as a hand pump with a digital pressure gauge which records the breaking load. An upper conical point is fixed to the frame and a lower point is integral with the piston of the cylinder. A rule attached to the frame allows the diameter of the samples to be read directly between the two tips.

The pump can be easily disconnected from the frame using a quick connector when transporting the device. In addition, a removable protective screen works in conjunction with a fixed tray to create a closed chamber capable of containing rock shards helping to maintain a clean and safe working environment.

Three types of tests are used depending on the quality of the rocks:

The diametric and axial tests are carried out on rock cores with a length-diameter (L / D) ratio greater than 1.0 in the first case and between 1.0 and 0.3 in the second case. When carrots are not available, raw samples of acceptable shape are used. In all three cases, the test is broken down into the following steps:

1) The sample is placed between the conical tips which are brought into just contact.

2) The distance “D e ” between the two points is read on the ruler.

3) The load is increased until the sample breaks within a period of between 10 and 60 seconds. The breaking load “P” is indicated by the pressure gauge.

* Based on conversion factor determined during calibration